Varna is the biggest city on the Bulgarian Black Sea coast and the third largest in Bulgaria. It is located about 130 km northern of Bourgas. On the territory of the city, during archeological researches, were found remains of human activity older than 7000 years. In the 6th century BC here was built the ancient fortress “Odessos”. Nowadays, Varna is a modern city with a lot of tourist attractions and many interesting historical and cultural places to visit.

Places to visit in Varna

In the park there are 10 tourists routes developed for the nature lovers – five normal tourist routes and five routes for people with special needs (incl. blind people and people with wheelchairs). The site is perfect for eco and photo tourism, biking, hiking, children’s tourism. Along all routes, there are numerous recreation places, equipped with sheds, benches, tables and fireplaces where you can sit, rests and have a snack, while enjoying the park, the sea and the Golden Sands resort panoramas.

More about the Park

The most interesting place for the tourists is the rock monastery “Aladzha” which is situated in the southwestern side of the Park. It was founded in the 12th-13th century, but abandoned in the 18th century. The monastery complex is located in two levels in naturally formed caves. On the first level are situated the monastery sells, the kitchen, the dining room, the monastery church and a crypt. On the upper level lies the Chapel. On the chapel walls there partly preserved medieval wall paintings. The complex is declared a historical and architectural national monument.

The Botanical Garden (Eco Park) was created in 1977. It is an ecological park – an arboretum, combining natural and artificial eco systems. The park collection comprises more than 300 different exotic bushes and trees, great number of irises and roses. It is declared a protected area with main purpose to shelter endangered plant species outside their natural habitat. On the territory of the Park is situated also the Academic Jockey Club where horse-riding lessons with an instructor can be performed. The Club offers also tours with a carriage on the territory of the Park.

More about the Botanical Garden in Varna

The Upright Stones (Pobiti Kamani) is a natural phenomenon which lies at 18 km distance western from Varna. It is also called “The Stone Forest” and comprises over 300 stone pieces in different shapes – stone columns 10 m high, cones, cylinders, blocks and pieces with different sizes. The unique stone composition covers an area of 7 km2 and is declared a natural landmark with national importance. Some of the stone pieces resemble human sculptures, animals or mystical creatures.

Cape “Galata” is one of the symbols of the city of Varna. It is also the borderline of the Varna Bay. The Cape is famous with its Lighthouse, which is one of the most important navigation facilities in the Bulgarian aquatory of Black Sea. The first Lighthouse starts operating with gas in 1863. In 1912 a new lighthouse is built and electrified. In 2001 is constructed a third, 22 m high modern lighthouse building with elevator.

The Palace in Balchik

Architectural Park Complex – the Palace in Balchik is the most impressive and fascinating place in Balchik, located in 40 km northern of Varna. This is an architectural and botanical park complex on the territory of the former summer residence of the Romanian Queen Maria. The Palace was designed by the Italian architects Augustino and Amerigo in 1924. Fountains, chapels, a bridge with waterfall and some buildings in different architectural styles can be seen around the park – Mauritanian, Bulgarian, Byzantine, Transylvanian, Roman and Arabic. Numerous different gardens are spreading all over the place, some of them even having own names as: Gethsemane Garden, Blue wave Garden, Garden with the cross-shaped water mirror, English Yard Garden, Magnolia Garden, Waterfall’s Garden, etc.

Monasteries, cathedrals and churches in Varna

There are 14 Orthodox temples in Varna, the most significant of which are:

The Dormition of the Theotokos Cathedral is the biggest temple in Varna, built in 1886 and was designed by the Odessan architect Maas. The building is a three-nave dome basilica with two aisles. The temple is decorated with large painted windows, ceramic tiles with different colors on the floors, copper dome covering. The Bell is 1,6 tons heavy.

The St. Nicholas Church is built in1865 and is also known as “the Seamen’s Church&rdquo

The St. Athanasius Church was built in 1838.

The Saints Constantine and Helena Church as a part of the 14th century monastery with the same name.

The Regional Museum in Varna

The Archeological Museum houses the historical and archeological treasures of the city. The museum is situated in an impressive old school building, constructed in 1892-1898. The 2 150 m2 exposition area is divided into four main thematic sectors:

The Prehistory Halls display artifacts from the Neolithic Age, the Stone-Copper Age, the early Thracian culture, the Varna Eneolith necropolis where more than 3000 golden objects, along with numerous copper, flint, stone and marble articles were found during archeological researches in 1972 on the territory of the city.

Antiquity Halls display historical and archeological remains of the ancient Odessos during the Ages (from its establishment until the Early Christian Times).

More about the Regional Museum in Varna

The Maritime Museum is located in the southern part of the Sea Garden. The museum halls display rich collection of ship remains, found on the Black Sea bottom, old anchors, uniforms of seamen and naval officers, flags, naval apparatuses and devices, torpedoes, etc. The exhibition is showing also the development of the naval and commercial fleet in Bulgaria.

Outside the museum building, there is an open-air exhibition showing the torpedo boat “Drazki” from the beginning of the 20th century which took part in the First Balkan War (1912 – 1913), torpedo and mine-sweeping cutters, a lot of anchors, boat cannons, sea mines, etc. There are also two helicopters which have served in the Bulgarian water-plane aviation. 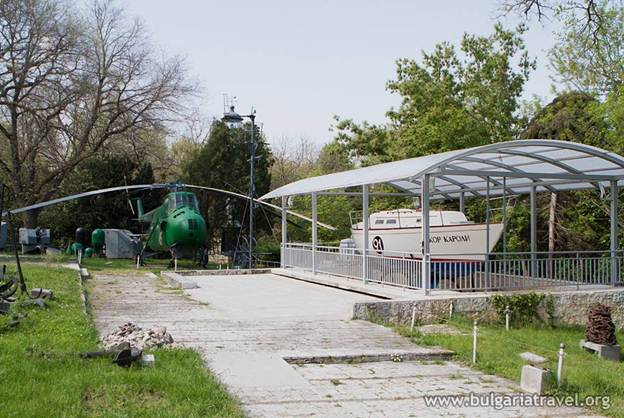 More about the Maritime Museum

The Ethnographic Museum is located in a beautiful house, built in 1860. The exhibition presents the cultural and the every-day life of the people in the Varna region for the period from the 18th century until the beginning of 20th century. On the first floor are presented various items connected to the basic occupations of the population – pottery and containers for storing milk, meat and grains, tools for plowing and harvesting, fishing, wine-making, etc.

On the second floor there is a large collection of traditional costumes, ritual masks for different celebration, ornaments and jewelry.

On the third floor are presented four rooms typically furnished for the end of the 19th century.

More about the Ethnographic Museum in Varna, Bulgaria

Varna offers a great variety of attractions and amusement sites.

The Aquarium is located in the Sea Garden where rich collection showing the diversity of the Black Sea flora and fauna is exposed.

More about the Varna Aquarium

The Dolphinarium is situated in the northern part of the Sea Garden. This is an unique attraction and one of the city symbols. Great number of visitors is coming here to watch the incredible Dolphin performances, including dancing and singing, acrobatics and balancing, games with the audience. The Dolphinarium has 1 200 sitting places and the pool is 15 x 12 m large and 6 m deep. There is also a nice cafeteria with 70 seats, situated in the eastern part of the building, having special underwater windows through which the dolphins can be observed. The Performances are conducted on 4 languages – English, Russian, German and Bulgarian.

More about the Dolphinarium

Astronomic Observatory and Planetarium is located in the Sea Garden. They were founded in 1968. The demonstration hall in the Planetarium has 80 seats. The hall is equipped with modern video and sound systems allowing the visitors to explore the depths of the Space and learn interesting facts about the Solar system and much more.

The Observatory is equipped with telescopes, binoculars and modern computer technologies which can be used by the visitors to observe the Sun, the Moon and the stars.

More about the Planetarium

Varna Zoo is situated in the Sea Garden on a territory of 23, 4 acres. Although it is not very big, the zoo-park shelters a lot of exotic and rare animals and birds and definitely should not be missed.

Aqua park “Aqua Polis” is situated in the resort “Golden Sands”, which is located close to Varna. It is built in Mauritanian-Mediterranean style and offers a great variety of attractions – many open and closed slides, such as Wild River, Niagara, Kamikaze, Black hole, Slalom, etc., different types of pools and fast-food facilities.