The town of Pomorie lies about 20 km away from Bourgas, to the North. It is situated on a narrow peninsula in Bourgas Bay. This is a very old town, which was founded by the Ancient Greeks. The old name of Pomorie was “Anchialos”. Nowadays, Pomorie is an attractive sea resort, famous for its curative mineral waters and the healing property of its mud. It is close also to our Bulgarian villa rentals Pomorie on Wikipedia

Places to visit in Pomorie

The Pomorie Lake is only 2 km north of the town. This is a very salty lagoon. The mud from the lake possesses medicinal qualities and is used for SPA, wellness and balneological purposes. The lake is also a protected area, because of the rare and endangered birds and other species which live here. There is a Visitor and Conservation Centre, where the tourists can learn interesting facts about the flora and the fauna of the lake and get useful information about the most interesting places where rare birds and other species can be observed.

The Antique Beehive Tomb is located west of the town of Pomorie, near the road Pomorie – Burgas. The tomb dates back to the 2nd – 3rd century AD. It is believed to have served as a heroon (mausoleum) of a wealthy Anchial family in which religious pagan rituals were carried out.
The tomb consists of a 22 m long corridor (dromos) and a circular chamber with a diameter of 11.60 m and a height of 5.50 m. It is made of stone and bricks. The tomb is arched with a semi-cylindrical vault in the center of which there is a hollow column with a diameter of 3.30 m, which extends upwards and merges with the outer wall. From the inner wall of the hollow column there was a spiral stone stair that led to the surface of the mound. There are five niches in the tomb of the tomb, in which the dead of the dead were placed. The walls are supposed to have been painted, but visitors can see only traces of green plaster today.
The tomb is the only one on the Balkan Peninsula. Its architecture and design impress us today with the perfect performance. Many architects from all over the world study the tomb to unravel the mystery of her mushroom dome. 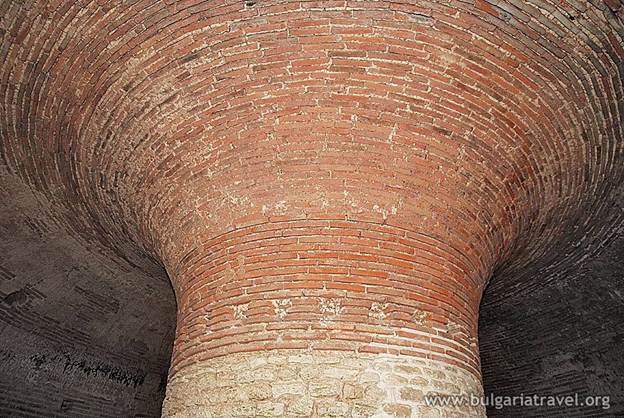 More about the Beehive Tomb

The Old Houses of Pomorie is an architectural reserve, where typical 19th century Bulgarian wooden houses and cobblestone streets can be seen. The houses are two-storey buildings which represent the so called “Typical Black sea coastal house”. The Reservation is located near the sea shore, in the east part of the town. The houses are private and free access is not allowed, but the tourists can admire them from the outside, while walking on the narrow cobblestone streets.

More about the Old Houses of Pomorie

Monasteries and churches in Pomorie

The St. George Monastery was founded in the 7th century AD by Byzantine settlers. As many other religious centers, the Monastery was burned down and destroyed by the Ottoman invaders. The present construction was built in 1856. There are not many wall-paintings because of the relatively new architecture of the temple, but the precious icons from 17th and 19th are attracting a lot of visitors. The Temple of St. George is the only male monastery in Southeast Bulgaria which still operates.

The Church of the Transfiguration of God was constructed in 1765 and is the oldest building in Pomorie.

The Historical Museum is located in a restored and renovated old house – an architectural monument, which served as a school in the past. The museum’s exhibition is divided into different sections: Prehistory Hall, Antiquity Hall, Middle ages Hall, Numismatics Hall, Ethnographic Hall.

More about the Historical Museum of Pomorie

The Salt Museum was established in 2002 and is unique for Eastern Europe. The exhibition traces the development of the salt production in the region, showing photos, old maps and models of authentic salt production tools and facilities. On the territory of the museum there are also still operating salt-works which are using the same production technology as applied in the past. See also our Bulgarian villa rentals near Pomorie

More about the Salt Museum

During the whole month of August there are different musical events, dance and theatric performances, exhibitions and wine tasting in Pomorie. There are also wine bazaars, where the connoisseurs can buy a bottle of nice Bulgarian wine on a very appropriate price. Interesting part of the festival is the arrival of God Dionysus and his entourage. Free samples of all kinds of wine can be tasted during the celebrations.