Plugs and sockets in Bulgaria

Those of you who have traveled a lot have most probably realized that each country has their very different electrical socket type. This information is quite important before your trip to the country since you can find a suitable adapter and come prepared.

How to use different plugs and sockets in Bulgaria

Proper access to electricity is crucial in today’s era since you need to charge not only your camera but your smartphone, tablet, smartwatch, smart bracelet, etc. This can turn out to be a problem if you find yourself stuck in a country with completely different electrical sockets, especially on arrival, when all of your devices need to be charged.

There is an actual way of classifying different sockets. It is done by calling them with certain letters from the alphabet. They start from A and end up with N. 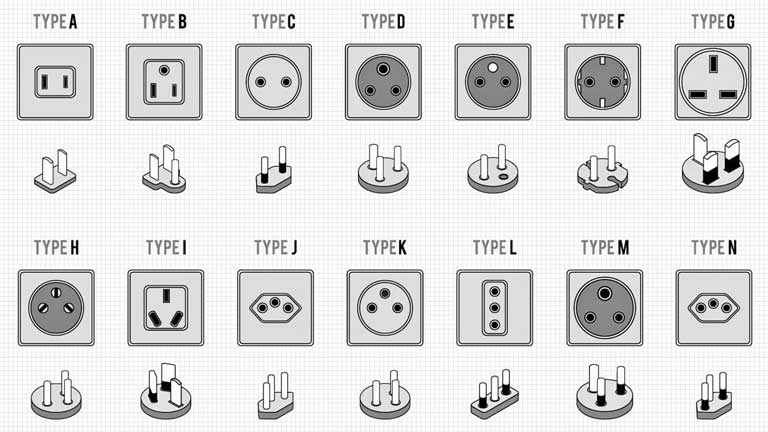 In Bulgaria, we use the plugs and sockets “C” and “F” types.

The C plug is the most common plug across entire Europe. It is also known as the Europlug since from all of the EU countries only the UK, Malta, Ireland, and Cyprus use a different type. In Bulgaria, we not only use the “C” plug but we stick to the “C” socket as well. The “C” plug can be best described as a plug with two prongs that are each about 19mm in length.

There is a growing tendency that the “C” sockets are being forbidden worldwide but here in Bulgaria we still use them almost everywhere. In case there is some socket different than the “C” one, it is most probably going to be the “F” one.

It is a common occurrence in countries such as Germany, Austria, the Netherlands, Sweden, Finland, Norway, Portugal, Spain and some of the Eastern European countries. This type of socket is similar to the “C” one except that it is round and has the addition of two grounding clips on the sides of the plug. The plug has two round pins, measuring 19 mm in length that are also 19mm away from each other.

If you are planning a trip to Bulgaria, make sure you come prepared with plugs that match our socket types. If your devices come with a completely different plug the best thing to do is purchase a universal plug adaptor to different sockets with the use of different nozzles. It is the most efficient and convenient solution. We highly recommend that option since you will not worry about plugs and sockets no matter where you go. Naturally, you can also purchase an adaptor device of any sort in the country you are visiting, but it is better to come prepared. Sometimes it is harder to find the proper adaptation device, especially if you come from a country that uses some of the more uncommon types of plugs.

Make sure to find a “C”, “E” or “F” plug adapters before coming to Bulgaria.

Electricity voltage and frequency in Bulgaria

If the frequency in Bulgaria (50 Hz) differs from the one in your country, it is not advised to use your appliances. But if there is no voltage difference, you could (at your own risk) try to use the appliance for a short time. Be especially careful with moving, rotating and time related appliances like clocks, shavers, and electric fan heaters.

To be sure, check the label on the appliance. Some appliances never need a converter. If the label states ‘INPUT: 100-240V, 50/60 Hz’ the appliance can be used in all countries in the world. This is common for chargers of tablets/laptops, photo cameras, cell phones, toothbrushes, etc.

This stype of socket is used in UK, Ireland, Cyprus, Malta. The Type G electrical plug has three rectangular blades in a triangular pattern and has an incorporated fuse. British sockets have shutters on the live and neutral contacts so that foreign objects can’t be introduced into them.

Visitors that come from the UK for a holiday in Bulgaria really have it the easiest. Since the type “G” plug is not as uncommon and it is actually quite easy to come across a good device that will connect you to the Bulgarian sockets. Some hotels and rental villas with pool even have their rooms equipped with such adaption devices.

Sockets and plugs – Type A & B

The “A” and “B” types of sockets, that are mainly used in the USA, Canada, Mexico, and Japan are also some of the easiest to find suitable adaptation for. It is important to note that the “B” type of socket is compatible with both the “A” and “B” plugs. So if you find an adaptation device with a “B” socket, you will also be able to plug any “A” devices in there as well.

The Type A electrical plug (or flat blade attachment plug) is an ungrounded plug with two flat parallel pins. Although the American and Japanese plugs appear identical, the neutral pin on the American plug is wider than the live pin, whereas on the Japanese plug both pins are the same size. As a result, Japanese plugs can be used in the US but often not the other way around.

The pins on Type A and Type B plugs have a hole near the tip that fits into ‘bumps’ found on the contact wipers of some sockets so that the pins are gripped more tightly allowing for better contact and also to prevent the plug from slipping out of the socket. Some sockets have spring-action blades that grip the sides of the pins, making the holes obsolete.

Type A socket has no alternative plugs

The Type B electrical plug has two flat parallel pins and a round grounding (or earth) pin. The earth pin is longer than the other two so that the device is grounded before the power is connected. As with the type A plugs, the American and Japanese versions vary slightly.

Type B socket also works with plug A

Other types of sockets and plugs in Europe

There are some more interesting socket and plug types across Europe. They are quite uncommon and there is actually a great chance that you won’t be able to find an adaptor for them in Bulgaria. So you really better come prepared in advance.

Type “J” that is commonly used in Switzerland and Lichtenstein is just one of them. Its unusual layout makes it one of the hardest to find an adaptor for.

The Type J plug has two round pins as well as a grounding pin. Although the Type J plug looks a lot like the Brazilian Type N plug it is incompatible with the Type N socket as the earth pin is further away from the centre line than on Type N. However, Type C plugs are perfectly compatible with Type J sockets.

Type “K” that is used in Denmark and Greenland is just as unusual and uncommon and we strongly advise our guests from those countries to find an adaptor or any solution before coming to Bulgaria.

The Type K plug has two round pins as well as a grounding pin. It is similar to Type F, the difference being that Type F has grounding clips instead of a grounding pin. Type C plugs are perfectly compatible with Type F sockets. Type E plugs and sockets are also used in Denmark.

Type “L” is the plug type used in Italy and Chile. It has 3 pins that are situated horizontally one, next to another. It is advised that tourists from those countries also prepare in advance since finding a device to adapt to Bulgarian sockets may turn out to be quite daunting task. It is definitely not impossible but it can turn out to be quite hard.

Italy has a kind of “universal” socket that comprises a “schuko” socket for C, E, F and L plugs and a “bipasso” socket for L and C plugs.

The “M” and “N” types that are used outside Europe are even harder to come across. So any future tourists from South Africa, Brazil, Thailand should really consider acquiring adaptation in advance.

The Type M plug has three round pins in a triangular pattern and looks similar to the Indian Type D plug, but its pins are much larger. Type M plugs are sometimes used for bigger appliances in countries that make use of Type D plugs, as well as in Israel (Type H). Therefore, sockets in these countries sometimes work with Type M plugs.

The Type N socket was designed to work with Type C plugs as well.
Brazil is one of the few countries that uses two types of voltage. While most states use 127 V, some of them use 220 V. It is therefore important to find out the local voltage before plugging in your appliance

Type “I” that is often used in Australia, New Zealand, and China are easier to come across.

The Type I plug has two flat pins in a V-shape as well as a grounding pin. A version of the plug, which only has the two flat pins, exists as well. The Australian plug also works with sockets in China.

The most uncommon and unusual one, that you will find really hard an adaption device for, is the type “H” plugs. It is a plug that is used only in Israel. The chances to find a suitable adapter for an “H” plug are really small.

Type H socket also works with plug C.
You can check here for more information about plugs and sockets

Just as anything else in Europe, there is a great diversification of the socket and plug types used among nations. It is quite important to check if your local plugs apply to the ones in the country you are about to visit, otherwise, you are in for a very unpleasant surprise.

Making a good research on the topic can save you a lot of problems on the very first day of your holiday and prepare you for any possible situation regarding your access to electricity.

Make sure to find a “C”, “E” or “F” plug adapters before coming to Bulgaria.